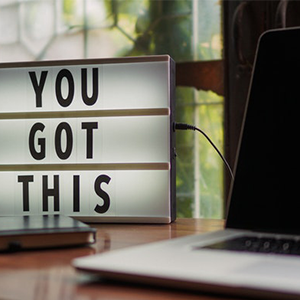 Can you motivate an employee whose performance is lackluster? The answer is imbedded in the distinction between motivation and inspiration: we can inspire the people who work with us, but motivation needs to come from within.

Leaders can be especially frustrated when they haven’t been able to inspire employees to perform at a higher level. One client suggested that an employee’s work was about a B- level and he was trying to raise it to an A. This is a worthy goal, but is it attainable?

People work for many different reasons, and some employees do the bare minimum because it’s just a job for them. This is frustrating, especially for a proactive manager who wants to get the best from his or her staff. If someone works for the security of a paycheck and not much more, it will be difficult to get more from them.

That said, here are some suggestions for raising the performance levels of such employees.

+ Don’t try to raise them from B- to A. Take it in smaller increments, such as from B- to B. During this process you may be able to learn more about what drives them. Think steps, not leaps.

+ Determine if there is something internal to their department that may be causing lackluster performance. Is the department acting like a cohesive team or as individual entities? If it’s the latter, the employee may feel demotivated, floundering on her own.

+ Find out what excites them (presumably outside of work) and see if you can integrate aspects of these interests into the job. I once had a client who was a competitive athlete and used those types of analogies to help her raise her professional performance.

If working on improvement doesn’t result in a change, it’s probably safe to say that this isn’t a good fit for you or them.