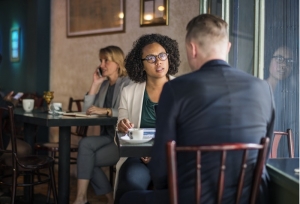 Sometimes when you’re managing people it can seem like you’re speaking two different languages. One of my clients, Marcus*, experienced a classic example of this. His employee, Cyndy*, was working on a client-intense project and basically abandoned the rest of her work while this was occurring.

Cyndy felt that while she was tied up with this client, how could Marcus possibly expect her to do more? Marcus felt that he had made it clear that although she would put most of her effort towards that one client, the rest of her work needed to be done (whether directly by her or delegated).

Marcus expected that Cyndy would do as he directed. On the surface, the communication seemed reasonable. But Cyndy essentially did what she wanted to do and ignored her manager.

The work that wasn’t completed caused a ripple effect of problems for other team members. There were many emotionally charged moments that cast a negative tone on the whole department.

After exhaustive discussions debriefing this situation, Cyndy still feels that she was right, and that Marcus was expecting too much of her.

We want to applaud employees like Cyndy who want to do a great job for the client. But you can’t reward her in this case because what she didn’t do created so many problems for others.

It’s frustrating to think that your communication is crystal clear only to have one of your staff defy you. In this case, Marcus needs to take corrective action to make sure that the petulance isn’t repeated at another time.