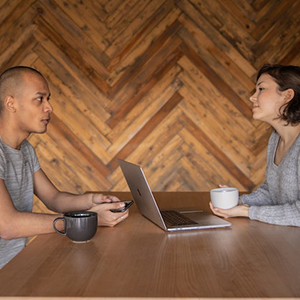 Have you ever made assumptions about what someone is thinking, reacted based on those assumptions, only to find out that you were completely wrong? Of course, you have! We all do this from time to time, but frankly, it’s a bad habit.

You never know what’s going on with someone…unless you ask…and the person actually responds fully.

A client was irritated by one of his managers, whose behavior had become more withdrawn and less communicative than usual. Somewhat reluctantly, the client finally admitted that he used sarcasm and criticism to express his displeasure about this manager. He also made the focus all about him, and not the manager. You can imagine how completely ineffective this tact was!

Simply put, you just don’t know what’s going on beneath the surface. Recently, I’ve had clients and friends dealing with everything from relocating an elderly parent to hospitalizing a severely ill child to marital problems arising from lack of work/family balance. These discoveries arose because of a shift in how people communicated.

When someone’s normal communication style shifts, nine times out of ten it has nothing to do with you; it has to do with the person. Don’t make it about you. Try to find out what lies beneath.

This doesn’t take much effort. You can say something as simple as, “I’ve noticed that you don’t seem yourself lately. Is there anything you’d like to talk about?” Sometimes the person will share, other times not. The acknowledgement that you noticed that something is different, however, will make the person appreciate your concern.

I sat in on an employee performance review recently where the employee clearly had an issue that she wasn’t willing to share with her manager. That obstacle will prove problematic, but it’s important that the manager does not make assumptions about what the underlying concern is. When the time is right, the employee will speak up.

You’re not always going to learn what lies beneath but pausing to try to find out will serve you well.