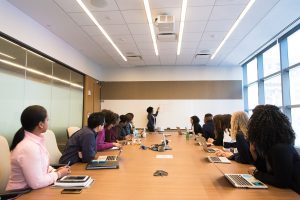 A friend of mine offered this adage. We were talking about an overseas trip he had taken with his CEO, who unfortunately was stricken with food poisoning the night before their first meetings. He ended up making 10 presentations in three days on behalf of the ailing CEO.

This situation would be terrifying for most people, but my friend was totally prepared. As I listened to his story, I thought about how few people project beyond the boundaries of their own job and could step in for someone with no notice.

How would you rate your employees in a similar situation? Who could do this? Who has even thought about this?

From a practical perspective in the workplace, readiness often becomes an issue when there is limited or no coverage among your employees. When each employee functions as an individual unit instead of part of a team, you’re at risk.

Think of this in terms of what you would do if a key person was suddenly disabled and there was no time to bring someone else up to speed. My guess is that often the person’s manager wouldn’t even know enough to jump in.

Leaders don’t always think about readiness because it hasn’t been a critical issue. It becomes painfully relevant when the unexpected happens. It can immobilize a team, which can then leak into other parts of an organization.

It’s advisable to put into place checks and balances to prevent these things from happening, in other words, proactive risk management. The bottom line is that if the unforeseen happens, you don’t want to be caught unprepared.